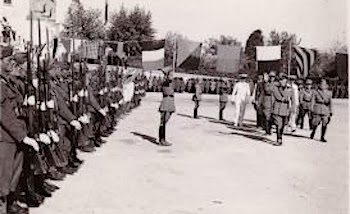 Bureaucratic certificates, such as permits and authorizations, as well as confidential reports, records of personal habits, political views and much more: the Fascist regime held 90,000 files on the inhabitants of the Italian Dodecanese, Greece a group of Aegean islands governed by Italy from 1912 to 1947, where at the time there were a total of roughly 130,000 inhabitants.
Now, 66 years after the end of Italian rule, the local Greek state archive has acquired the archive of the Royal Carabinieri Group – Special Central Office, hosted for all these years within the Rhodes police station. The documents will be available for consultation by researchers once the considerable effort of cataloging is complete.
Italy, which invaded the Dodecanese in 1912, taking the island group from the Ottoman Empire, administered for 35 years what was called the “Italian Possessions of the Aegean.” The Italians left the islands in 1947, with the signing of the Paris Peace Treaties, which formally ended the Second World War. The Dodecanese were ceded to Greece with Turkey’s consent (until 1912 they had been part of the Ottoman Empire) under the condition that they were to be kept demilitarized.
Athens therefore came into possession of all the documents produced by the former rulers, available for consultation at the General State Archives. But up until now, only about 20,000 files relating to all aspects of the experience of this government (to some scholars, not to be confused with a colony) were known about-from public works to trade, to financial aspects of the relationships with the various religious communities.
The new archive, however, contains about 90,000 personal files that include information of a private nature on Italians, Greeks, Turks, Jews and foreigners who lived in Rhodes and the other islands. Alongside land reclamation, agricultural development and relevant urban works and building, the Italians had devoted themselves to putting most of the population under strict supervision through an incessant daily practice of data collection.
Eirini Toliou, director of the archive, emphasizes that “it was Mussolini himself who wanted these files, making them one-of-a-kind.” Under Toliou’s supervision, a team of researchers and archivists are preparing to inventory the material to make it available to experts. “Even though the archive index is intact, making our job easier, it’s not possible to indicate precise times,” said Toliou. “Unfortunately, some files were lost over the years due to external removal operations, probably to hide stories regarding collaboration with fascism.”
Marco Clementi, researcher at the University of Calabria and member of the team at the Dodecanese state archive, confirms that the story of the possession will now have to be seen in a new light: “Hiding behind a discreet administration was the dark work of a shrewd dictatorship, bound to keep an entire population under control due to an obvious inability to give and receive trust. “Speaking about the files, Clementi explains that “almost all of them regard direct descendants of people who live in Rhodes today. It’s like a sort of family album.” In fact, rules regarding consultation of the files will have to take this fact into account, keeping certain data, such as health status or sexual preference, from public view, should it appear in the files.
Since some of the documents have partly to do with Jewish citizens — the communities of Rhodes and Kos were eradicated almost entirely during the Holocaust — the United States Holocaust Memorial Museum in Washington, D.C. has expressed an interest in the political archive. A delegation will arrive in Rhodes at the start of 2014 to decide on timing and intervention methods in order to digitize at least part of the archive. Italy, at the moment, hasn’t shown any sign of interest in the documentation.
(source: ANSA)
Pubblicato da MC. Marconista a 09:08